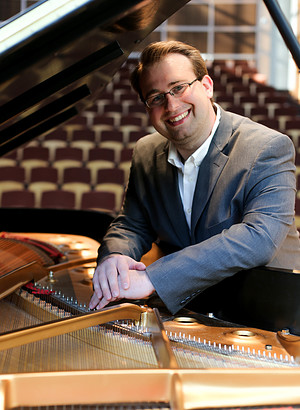 An award-winning pianist, Andrew Focks has performed as a solo recitalist, concerto soloist and chamber musician in venues throughout the United States, Hungary, Italy, Austria, Germany, England, and China. He has made successful solo debuts in concert halls around the world, including Carnegie Hall’s Weill Recital Hall, and has been broadcasted on television and radio. Within the United States he has appeared on artist series and performed in Cleveland, Houston, Chicago, New York, Interlochen, Ft. Myers, Boston, San Jose, Tallahassee, Columbus, Tampa, and Albuquerque, among others.

Greatly in demand as a teacher, Dr. Focks’ students have performed in venues including Millennium Park (Chicago), Severance Hall (Cleveland), Carnegie Hall (New York), Hollywood Bowl (Los Angeles), Olympiahalle (Munich), Sportpaleis (Antwerp), The Kennedy Center (Washington D.C.), the White House, and more. They continue to be frequent scholarship recipients and competition prizewinners at the regional, national, and international levels and further their studies at some of the world’s most distinguished music institutions.

Focks gives frequent masterclasses and lectures throughout the United States and Europe, including at the National Conference on Keyboard Pedagogy (Chicago) and multiple state music teacher association conferences. His articles have been published by Piano Magazine as cover stories and online content, and he is routinely asked to sit on the jury of competitions and festivals. He is the current President of the Ohio Music Teachers Association after previously serving as President of the Northeast Ohio Music Teachers Association and Vice President of Student Activities on the OhioMTA State Executive Committee. He has also been an advising member of multiple arts committees and chair for music conferences.

Born in Germany, Focks received his early music training at the New England Conservatory’s Preparatory School. He holds degrees in piano performance from Florida State University (BM ’11), Rice University (MM ’13), and the Cleveland Institute of Music (DMA ’16) and was awarded numerous scholarships and awards throughout his studies. His education was further supplemented at numerous summer festivals, including seven years at the Mozarteum Sommerakademie in Salzburg. His list of teachers and mentors include Arnaldo Cohen, Jon Kimura Parker, Ya-Fei Chuang, Robert Levin, and Daniel Shapiro.

Focks has served on the faculty of several music schools, universities, and summer academies, including annual engagements at festivals in both the United States and Europe. He is currently a member of the piano and music theory faculties of the Cleveland Institute of Music Preparatory & Continuing Education Division. Working with teachers and students from around the world, he is also an independent teacher and coach.